In roaring twenties Chicago, chorine Roxie Hart murders a faithless lover and convinces her hapless husband, Amos, to take the rap...until he finds out he's been duped and turns on Roxie. Convicted and sent to death row, Roxie and another "Merry Murderess," Velma Kelly, vie for the spotlight and the headlines, ultimately joining forces in search of the "American Dream": fame, fortune, and acquittal. This sharp-edged satire features a dazzling score that sparked immortal staging by Bob Fosse.

This production is recommended for mature audiences (13+) due to content.

CONCERTS AT THE GALION: Bullit Band 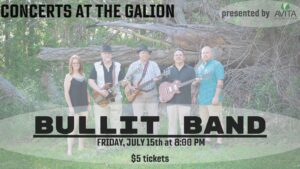 Join us on Friday, July 15th at 8:00 PM for our third night of GCT's year-long concert series with THE BULLIT BAND.
A little bit about the band:
We play anything from 50s - 80s rock n roll, top country music, and a few modern pop songs
Check out our fourth band HERE
Concert begins at 8pm and the doors to GCT will open at 7:30pm. Tickets are $5 each. 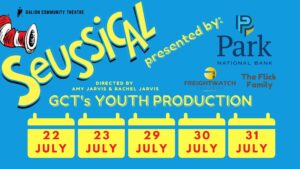 Now one of the most performed shows in America, Seussical is a fantastical, magical, musical extravaganza! Tony winners, Lynn Ahrens and Stephen Flaherty (Lucky Stiff, My Favorite Year, Once on This Island, Ragtime), have lovingly brought to life all of our favorite Dr. Seuss characters, including Horton the Elephant, The Cat in the Hat, Gertrude McFuzz, lazy Mayzie and a little boy with a big imagination – Jojo. The colorful characters transport us from the Jungle of Nool to the Circus McGurkus to the invisible world of the Whos.

The Cat in the Hat tells the story of Horton, an elephant who discovers a speck of dust that contains the Whos, including Jojo, a Who child sent off to military school for thinking too many "thinks." Horton faces a double challenge: not only must he protect the Whos from a world of naysayers and dangers, but he must guard an abandoned egg, left in his care by the irresponsible Mayzie La Bird. Although Horton faces ridicule, danger, kidnapping and a trial, the intrepid Gertrude McFuzz never loses faith in him. Ultimately, the powers of friendship, loyalty, family and community are challenged and emerge triumphant. 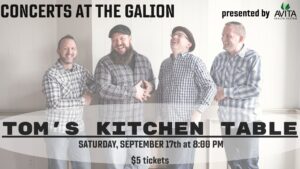 Join us on Saturday, September 17th at 8:00 PM for our second night of GCT's year-long concert series with TOM'S KITCHEN TABLE.
A little bit about the band:

There’s nothing quite like sitting around the table making music with friends just for the sake of making music. Tom’s Kitchen Table brings that experience to your event with a 4-man band or 3-man trio. Occasionally, we make an extra seat at the table for one of our talented friends to join in, because, well, that’s what making music is all about.

Check out our fifth band HERE
Concert begins at 8pm and the doors to GCT will open at 7:30pm. Tickets are $5 each. 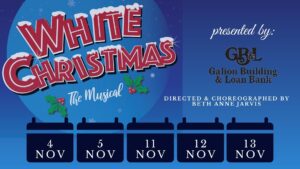 Veterans Bob Wallace and Phil Davis have a successful song-and-dance act after World War II. With romance in mind, the two follow a duo of beautiful singing sisters en route to their Christmas show at a Vermont lodge, which just happens to be owned by Bob and Phil's former army commander. With a dazzling score featuring well-known standards including “Blue Skies,” “I Love A Piano,” “How Deep Is the Ocean” and the perennial title song, White Christmas is an uplifting musical worthy of year-round productions. 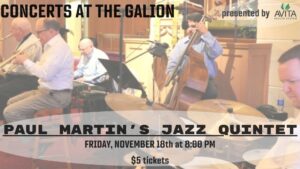 Join us on Friday, November 18th at 8:00 PM for the final night of GCT's first year-long concert series with PAUL MARTIN'S JAZZ QUINTET.
A little bit about the band:

Check out our second band HERE
Concert begins at 8pm and the doors to GCT will open at 7:30pm. Tickets are $5 each.